You are here: Home / News / Gaming commission chair may now serve up to four consecutive years

A legislative committee has approved a change that will let the chairman of the Iowa Racing and Gaming Commission remain in that role twice as long.

The legislature’s Administrative Rules Review Committee today gave final approve to a rule rewrite, so the chairman can serve up to four consecutive years.

Representative Dawn Pettengill, a Republican from Mount Auburn, says it makes sense to keep Jeff Lamberti, the commission’s current chairman, in place because the commission’s being sued. “He’s done all this work and why have someone new come in and have to pick up in a situation that’s already ongoing,” Pettengill says.

Lamberti, a lawyer and former legislator from Ankeny, has served as commission chairman for the past two years. The commission holds a leadership election once a year, in July, and the commission’s previous rules only allowed a chairman to serve two consecutive terms or two years. 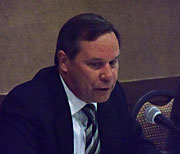 Now a chairman can serve four consecutive terms — up to four years in a row. Brian Ohorilko, administrator of the Racing and Gaming Commisson, told legislators all five commission members think keeping Lamberti as chair is the best decision.

Penn National Gaming has sued over the commission’s decisions to order its Argosy riverboat casino closed in Sioux City and to grant a new operating license for a land-based Hard Rock Casino that’s scheduled to open in Sioux City August 1.

The commission’s next meeting is July 31 and Lamberti is expected to be reelected as chairman.