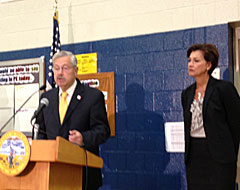 Republican Governor Terry Branstad is dismissing a Legislative Services Agency report which concludes an embattled state agency isn’t saving money after outsourcing jobs — and the state workforce is growing rather than shrinking.

“If you analyze in depth this report on the Department of Administrative Services you’ll find some of it has to do with the motor pool and some other issues,” Branstad says, “but I also would say I have great confidence in the new director of that department.”

The new director started this spring after Branstad fired the previous director who had maintained no extra money had been offered to terminated state employees who promised to keep their exit packages secret.

The Legislative Services Agency’s analysis of five years of data shows the Iowa Department of Administrative Services budget “increased rather than decreased.” The budget for the agency drawn up in the final year of Democrat Chet Culver’s administration was $97.4 million. The agency’s budget in the second year of Governor Branstad’s administration was 17 percent higher and agency officials say it’s because computer and vehicle purchases are included. Branstad also counters that he has reduced the overall size of state government operations since he took office in 2011.

“We have reduced the number of state employees by over a thousand in the three and a half years that the lieutenant governor and I have been in office and there’s been considerable savings because of that,” Branstad says.

However, the Legislative Services Agency report found that while the number of state employees had decreased during Chet Culver’s final two years in office, it had “rebounded” once Branstad returned to office. The report found the number of state employees grew by three percent during the first budgeting year Branstad oversaw and by another three-point-four percent during the second year.