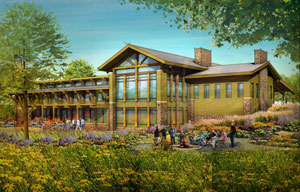 The Vision Iowa Board today awarded Community Attraction and Tourism grants to projects in Tama and Polk Counties. The town of Dysart is getting a $176,000 grant to help rebuild a pair of structures.

Dysart Mayor Pam Thiele says one project involves renovations to a community building that dates back to 1937. “It’s time to add an elevator to gain better access to the upper floor, add air conditioning, and renovate restrooms,” Thiele said. “That compromises about $812,000 of the project.”

Another $68,000 will be spent to rebuild a Dysart city park band shell that was torn down in the 1960s. “We just had a great Fourth of July celebration and our talent show was held on the back of a flatbed trailer. On Sunday, we had a nice worship gathering in the park. So, next year, that’ll be my push – to have the band shell done by the Fourth of July, so we can have those events in that structure,” Thiele said. 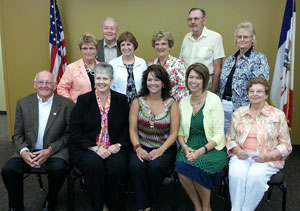 The Dysart delegation. Mayor Pam Thiele is second from the left .

The City of Dysart is paying for roughly half of the total project cost, with private fundraising, the Vision Iowa money, and regional grants covering the rest of the tab, according to Thiele.

In addition to the Vision Iowa funding, the nearly $7 million project is being backed by private fund raising and a $4 million bond referendum approved by voters in 2012. The two-story Jester Park Conservation Center will host environmental and summer camps for youths, and space will be available to rent by the general public.

“Lastly, we’ll have a rental area that people can come to for outdoor recreation equipment, such as canoes, kayaks, fishing poles, fishing nets, and so forth,” Rankin said. The facility could be open by the spring of 2016, according to Rankin.