You are here: Home / News / Ground broken for new casino near Jefferson in Greene County 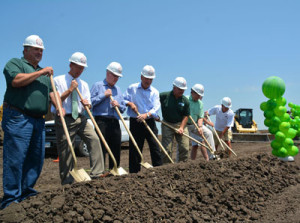 Supporters and developers of the new casino in Greene County gathered for a groundbreaking ceremony today. Work got started on the site for the Wild Rose Casino near Jefferson on Monday after some delays caused by heavy rains.

Wild Rose Jefferson president, Tom Timmons, says they are hoping for dry weather to get the construction moving along.

“I think if we get the normal July weather like we are all used to in this state, we can start pouring some footings by the first of August and get the concrete down. Then the steel will come in September and get the shell done and we’ll start working indoors during the winter,” Timmons says. He says they should be able to open by late summer of next year.

The casino site is at the northwest corner of U.S. Highway 30 and Iowa Highway 4. Timmons talked about the project with Radio Iowa, “Furniture, fixtures, everything else, slot machines, tables, chairs and the building itself, is probably going to be about a 40 million dollar project. We’re projecting somewhere around 250, 270 employees. We’ll have a total payroll of around seven million dollars, is what we’re projecting.”. The casino expects to turn $1.5 million over to its non-profit partner every year.

Some people have already been contacting them about working at the new casino, but Timmons says they aren’t ready to do any hiring.”We haven’t really started looking… we certainly are taking applications,”Timmons says. “We will probably start looking more seriously at that at the end of this year of the first part of next year.”

The Racing and Gaming Commission approved the gambling license for Greene County on June 12th.