You are here: Home / Health / Medicine / Roundtable discusses impact of the Americans with Disabilities Act 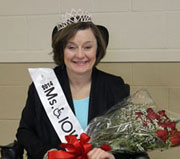 Tomorrow marks the 24th anniversary of the signing of what some consider one of the most important civil rights laws of the 20th century. The Americans with Disabilities Act, or ADA, was authored by Iowa Senator Tom Harkin.

Michele Meadors, who serves as Miss Wheelchair Iowa, is joining Harkin, Governor Branstad and others for a roundtable talk about the ADA this afternoon at Drake University. Meadors says Harkin is a “true hero” for his years of work on the legislation.

“As much as it’s benefitted me being able to live independently in a community I love being in Des Moines and the state of Iowa, none of this would have happened had it not started out with Senator Harkin that many years ago.”

Earlier this week, President Obama signed the Workforce Innovation and Opportunity Act into law, legislation Harkin also co-authored. It aims to insure all workers, including those with disabilities, have access to 21st century job training and employment opportunities.

Meadors says she’ll be in Washington, D.C. next week and hopes to speak to several members of Congress about just that type of legislation. Meadors says, “That’s going to be one of the things that I want to push really hard for because we’re going to have a lot of disabled veterans that are going to need employment through a lot of different struggles and a lot of different technologies.”

During a conference call with reporters earlier this week, Harkin talked about the ADA, what he called “landmark” legislation. “In addition to being an Emancipation Proclamation for people with disabilities, the ADA has the very down-to-earth purpose of ensuring people with disabilities can go places and do things that all other Americans take for granted.”

In a statement, Harkin says, “Over the past 24 years, the ADA has provided opportunity and access for more than 56 million Americans with disabilities. Prior to passage of this landmark civil rights legislation, these Americans routinely faced prejudice, discrimination and exclusion and insurmountable physical barriers in their everyday lives.”

Meadors, of Des Moines, was crowned Ms. Wheelchair Iowa earlier this year in Iowa City. She was left paralyzed from the neck down following a car accident in 2011. The 46-year-old was appointed by Governor Branstad to serve on the State Independent Living Council. Meadors will represent Iowa at the Ms. Wheelchair America event in Long Beach, California, next month.