You are here: Home / Human Interest / Swap meet features ‘petroliana’ and other collectibles 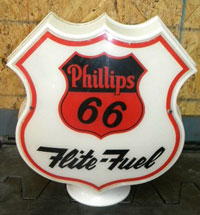 A globe from an antique gas pump.

The nation’s oldest and largest gas, oil and auto-related advertising show and sale is getting underway this morning in central Iowa. John Logsdon is organizing the 28th annual Iowa Gas Swap Meet in Des Moines which brings in 200 vendors and thousands of gawkers from all across the U.S. and some international collectors.

Logsdon says it’s not just fuel-related items either. “We have soda pop and farm implement signs, of course automobile signs and lots of other knick-knacks,” Logsdon says. “It’s expanded to antique toys and even other country store-type advertising items.”

While the collector pool for this type of merchandise used to be somewhat limited, the rising popularity of TV shows, like the eastern Iowa-based “American Pickers” on the History Channel, has brought in a large new crop of fans.

“The Pickers used to come to our show and get a lot of stuff before they got famous,” Logsdon says. “There definitely is a lot more interest in decorating with antique advertising because a lot of it is very beautiful. People decorate their garages, their homes, maybe decorate their kitchen with grocery-related items.”

These types of collectibles that revolve around gas and oil are called “petroliana” and while you might find an antique oil can for five dollars, other items are much more pricey. He says, “There is a two-sided Lincoln-Mercury neon dealer sign, the neon’s been restored, but it’s in a crate for $20,000.”

Gasoline pumps dating from the 1920s through the ’60s often featured glass globes on top advertising the brands of fuel. Logsdon says those globes are very popular and the more rare, the better. “There’s some reproduction ones and some common ones like Sinclair for maybe a hundred bucks, the more common plastic-body ones for $200 and thousands and then there’s some globes that are in the thousands and even tens of thousands of dollars,” Logsdon says.

Auctions are scheduled for Thursday at 6 P.M. and Friday at 9 AM. The show and sale runs through Friday. Admission is free at the Holiday Inn Airport in Des Moines.