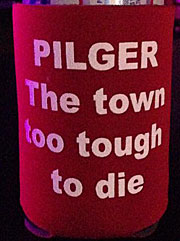 Residents of western Iowa and eastern Nebraska gathered at a bar in Omaha last night to support a benefit concert for the tornado-ravaged town of Pilger, Nebraska. Four bands, all featuring members with ties to the small town, performed at The Waiting Room.

Many residents of Pilger were in attendance, including 61-year-old Keenan Meyer, who’s astounded with all the donations and volunteer efforts to help the community of roughly 350 people recover from the disaster on June 16.

“It’s just amazing the people who came in, even that night, an hour later there were people with trucks and big equipment. “Of course, they couldn’t do anything because they were evacuating the town, but it’s really amazing what they’ve gotten done in a month,” Meyer said. “I’ve talked to people from Illinois and Texas who have given up their vacation to come (to Pilger to) pick up sticks and bricks.”

An EF-4 tornado ripped through Pilger, while another EF-2 twister passed just outside of town. Two people were killed, including a 5-year-old girl, while 16 more were critically injured. 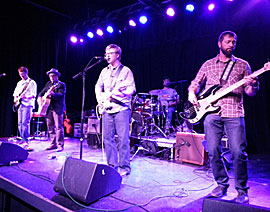 The Omaha band “Clarence Tilton” performs at the benefit concert.

Meyer believes things could’ve turned out much worse had the storm not passed through in the afternoon. “You know, if it would’ve been two in the morning and people wouldn’t have heard a siren or got to shelter, we could’ve had two dozen deaths,” Meyer said. “So, in that respect, you hate to lose anybody, but it saved a lot of people that it was in the daytime.”

Over half of the buildings and homes in Pilger were destroyed or severely damaged.

Meyer said his home, located four blocks away from where the tornado made a direct hit, sustained about $20,000 in damage. A large tree fell in his yard, but missed hitting his house.