You are here: Home / Crime / Courts / Mason City man not guilty by reason of insanity in father’s death 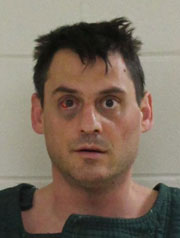 A Mason City man who killed his father has been found not guilty by reason of insanity. Attorneys for both the prosecution and defense said each of their mental health specialists agreed 43-year-old Thomas Barlas, Junior had a psychotic episode at the time he stabbed his father to death on July 18, 2013.

Cerro Gordo County Attorney Carlyle Dalen said he was not surprised with today’s (Wednesday’s) proceedings. “The state cannot go forward with a crime against somebody who was insane at the time when they committed that event and that’s what took place here,” Dalen said. “The doctors said he had a psychotic event, something where he did not understand right from wrong, when he took his father’s life. We understood that, all of the experts said that was true and he was insane at the time this was committed.”

Barlas will now be transported to the Iowa Medical and Classification Center in Oakdale where he will receive a mental health evaluation. “They’ll report back to the court within 30 days and we’ll have another hearing to see what’s appropriate…whether he’ll be housed longterm in Oakdale, or another facility that’s appropriate, or what will happen regarding his mental health,” Dalen said.

Court documents showed Barlas, moments after killing his father, told his mother, “Mom, I killed Satan.” Dalen said all parties involved in the case believe the correct action is being taken. “There are a lot of protections in place for the community and to rehabilitate Mr. Barlas, deal with his mental illness, and see if we can help him in a way that he can have a future too,” Dalen said.

Barlas’ attorney, Aaron Hamrock, said his client has been getting the help he needs. “This crime was not a premeditated crime,” Hamrock said. “Mr. Barlas needs to continue with his mental health treatment and that is what I think the court was emphasizing today.” Barlas’ family was in the courtroom for today’s proceedings and Hamrock said they’ve shown their support despite the loss of a family member.

“Everything that I know is that Tom Barlas and his father, Tom (Senior), were very close,” Hamrock said. “Knowing that and knowing what happened here…this was just devastating for this family.” A hearing will be scheduled sometime in September after the evaluation of Barlas is complete.