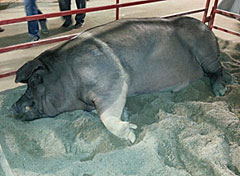 A giant pig, raised by a group of Iowa State University graduates in honor of a fallen friend, is the winner of the Iowa State Fair’s Big Boar contest.

“Peabody” weighed in at 1,273 pounds. Peabody was also the nickname for Brad Peyton, who recently died of pancreatic cancer. He was 57.

His friend, David Schaefer, said Peyton grew up showing pigs at the State Fair and longed to win the Big Boar contest. “Two years ago, we had another boar that was presented and finished second to a boar from Indiana,” Schaefer said.

The team that raised Peabody sold T-shirts, raising $3,000 for the Shining City Foundation, a nonprofit organization that Peyton helped found that builds medical clinics and other projects in remote, underserved areas of China, Africa, and other countries. 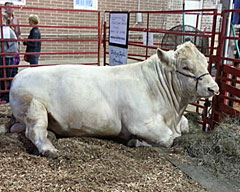 “He was an incredible guy,” Schaefer said of Peyton.”He had a lot of passion for people who don’t have a lot.”

Peabody will be on display for the remainder of the Iowa State Fair, which ends on August 17. The five-year-old boar beat out “Big Mac” who weighed in at 1,142 pounds.

This year’s winner of the State Fair’s “Super Bull” contest is “Big Daddy.” The bull, raised on Stalcup Farms in Prescott, tipped the scales at 3,012 pounds.