You are here: Home / News / King talks about trip to southern border at Iowa State Fair 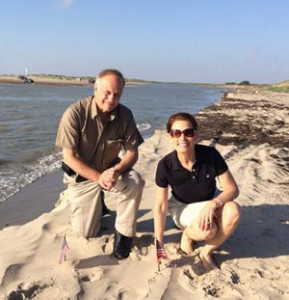 Iowa Congressman Steve King did not mention his Democratic challenger today) as he spoke at the Iowa State Fair. Instead, King used much of his time on Des Moines Register’s “Soapbox” to criticize President Barack Obama.

“Just in case you wonder if I might have changed my mind, no, Obamacare must be pulled out by the roots,” King said, as his supporters cheered. “Let me amend that, ripped out by the roots. It is a malignant tumor that is metastasizing and feeding upon America’s God-given liberty and it must go.”

King also talked about his recent trip to the U.S. border with Mexico. “We’ve got to secure our borders,” King said to more applause. He was joined on the trip by Minnesota Congresswoman Michelle Bachmann.

King said their first stop was near Laredo, Texas and the Rio Grande River. “We planted an American flag right there at the tip of Texas and then we turned the volume up all the way on Toby Keith and drove up out of there,” King said with a laugh.

A short time later, King said they spotted a pregnant woman in a raft, floating across the river to the U.S. border. “And she stood there and waited for the border patrol where she could apply for asylum and of course that baby will be born in America and be treated as an American citizen,” King said. “That happens every day. We didn’t have to wait one hour and that’s only one little piece of the river we were looking at.”

There were some protesters who confronted King after his 19-minute long speech. King’s opponent in the November election is Democrat Jim Mowrer of Boone. He is scheduled to appear on the “Soapbox” on Tuesday, August 12 at 10:30 a.m.