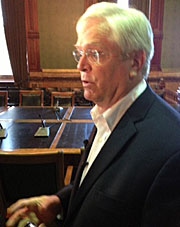 Jack Hatch, the Democratic candidate for governor, is questioning why the chief administrative law judge in a key state agency has now become a political appointee. Hatch says it means that judge can be pressured and even fired by the governor for making a decision the governor doesn’t like.

“This sets a very dangerous pattern of an administration that really has, I consider, abused its executive authority to the point where the impartiality of his administration is really to be questioned,” Hatch says.

Governor Terry Branstad, a Republican who is seeking a sixth term as governor this year, says the shift came after a review of all employee classifications in all state agencies.

The chief administrative law judge in the Department of Inspections and Appeals had been a so-called merit employee, part of a union contract which Hatch and others say shielded the judge from political pressure. That shield is now gone, according to Hatch.

“One of the traditions in Iowa is to provide the people of this state not only the appearance but the actual, absolute guarantee that any appeal of a decision — in this case of any administrative agency — is going to have a fair hearing,” Hatch says.

Hatch says that “impartiality” is now in question. Branstad rejects the charge.

“First of all, there’s no politics involved in this whatsoever,” Branstad says. “We want to make sure that these people are fair and they treat everybody in an appropriate way…and that includes employees, employers, anybody that might have a case that would come before them.”

Hatch and other legislators say a state law requires administrative law judges to be merit employees rather than political appointees. Branstad disagrees. Hatch says Branstad might be sued over this change.