You are here: Home / News / Crowd of Iowa conservatives gets preview of 2016 messages 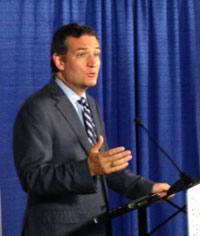 Texas Senator Ted Cruz drew the crowd to its feet with what he described as “a path to winning” conservative victories.

“I am convinced come 2017, with a new president in the White House, we will repeal every word of ObamaCare,” Cruz said, near the end of his speech.

And Texas Governor Rick Perry got a roar of crowd approval when he mentioned his recent decision to send Texas National Guard troops to the southern border.

“The message to the president of the United States is clear,” Perry said. “If you will not secure the border of our country, then the State of Texas will.”

Mike Huckabee, the victor of Iowa’s 2008 Caucuses, spoke of the “deep-seated anger” among conservatives about Internal Revenue Service scrutiny of political groups.

“We have every right to be angry and to demand accountability from a government who would do that to us,” Huckabee said, to applause and a few whistles from the crowd. “May I say, I’ve got a simple solution. Repeal the 16th Amendment and put in the Fair Tax, get rid of the IRS, the Lois Lerner’s of the world and rid ourselves of this criminal activity in the name of tax collection.” 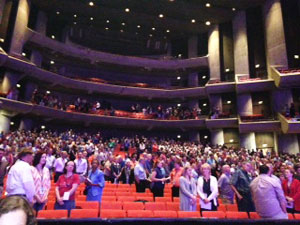 Crowd stands, turns and makes pledge to one another during Pastor Rafael Cruz’s address.

Lerner is the former IRS official who has publicly admitted the agency inappropriately targeted some groups.

Louisiana Governor Bobby Jindal got waves of applause for denouncing the so-called “Common Core” for schools which some conservatives believe is an attempt to federalize education in America.

“The federal government needs to get out of our classrooms,” Jindal said, to extended applause.

Rick Santorum, the winner of the 2008 Iowa Caucuses, urged his fellow Republicans to expand the party’s message beyond the “job creators” — to reach “working class” voters.

“Republicans talk about businesses and Wall Street and Democrats talk about government programs and hand-outs. And where’s the rest of America?” Santorum asked. “We need an agenda that talks to them, that’s a pro-growth agenda — don’t abandon the things that we believe in — but focus on the things that are going to matter to the folks in America who are struggling and feel left behind and left out of the conversation.”

Hear all the speeches here.

Kentucky Senator Rand Paul did not attend the event, but he sent a video that was played for the audience Saturday afternoon. Perry is still in the state today, campaigning with Iowa candidates on the 2014 ballots. Tomorrow Perry will speak at the State Fair.