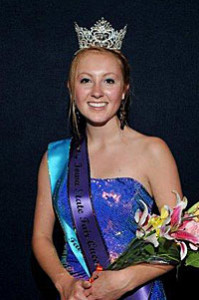 A 17-year-old from Spencer has been among the busiest people on the Iowa State Fairgrounds this week, handing out ribbons and trophies, posing for pictures and participating in a few competitions. Elizabeth Glover was crowned the 50th Iowa State Fair Queen last Saturday.

Glover, who will be a senior at Spencer High School this fall, frequently uses the word “awesome” to describe her experience on the fairgrounds this past week.

“I love meeting the people,” Glover said. “I mean it’s so fun, the different personalities that you meet. They’re so happy to see me. They’re just happy and I get happy when I see them so it’s just awesome.”

Fair officials say the judges of the queen contest rate the girls on their overall appearance, charm and poise, as well as their activities in their home communities — and Glover was chosen because of her bubbly, genuine personality. The coronation ceremony was Saturday night. On Thursday morning, Glover participated in two different the contests at the fair.

“I was in the bubble blowing contest and the pie eating contest, which was awesome,” Glover said. “It was so much fun.”

Glover’s bubble gum bubble was 4.5 inches wide, not big enough to win the top prize. Even when she was eating pie competitively, with no hands, Glover’s crown stayed on her head.

“Actually, I have a very awesome chaperone who helps me hook it in (to my hair) very well so that it doesn’t fall out,” Glover said, with a laugh.

Glover has had to get used to wearing the crown nearly every waking hour this week.

“The first couple of days it was very interesting,” she said, touching the glittering object sitting on the crown of her head. “I was, like, careful that it wouldn’t fall off, but now it’s a lot better.”

Glover and her parents, Louis and Lois Glover, hadn’t planned on spending the week in Des Moines, so they had to race back to Spencer to get clothes.

“I was home for Sunday for about an hour and then we had to leave right away,” Glover said.

The long gown Glover wore for the coronation ceremony would have been difficult attire for all the walking she’s been doing on the fairgrounds. It was her prom dress.

“I got it from a girl in a neighboring town and it was perfect because I was looking all over for a prom dress. I couldn’t find one,” Glover said. “I mean, they’re so super expensive these days. It was super cheap and I actually rented it, but then I bought it from here and I didn’t have to alter it at all, so it was perfect.”

“Wow, it’s a tough choice,” Glover said. “I mean, they’re both amazing. They both have different things, so it’s kind of hard to compare them — so they’re both kind of awesome in their own separate way.”

Glover, as queen of the 2014 Iowa State Fair, received a $2800 college scholarship. She’ll graduate from high school next spring and she plans to become a nurse and work with children.