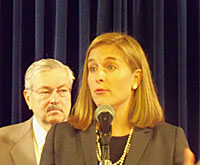 The statue of former U.S. Senator James Harlan that used to sit in the U.S. Capitol will be formerly unveiled at its new home at Iowa Wesleyan College in Mt. Pleasant next week. Iowa Department of Cultural Affairs director, Mary Cownie, says artist Nellie Walker created the eight-foot tall bronze statue of Harlan.

“We were delighted to learn that he was also commissioned to create a statue of Belle Babb Mansfield, who also resides on the campus of Iowa Wesleyan and was installed in 2008,” Cownie says. “She was the first woman in the nation to pass the bar exam, and was the nation’s first female attorney.”

The Harlan statue was replaced in Washington, D.C. by a statue of Iowa-born crop scientist and Nobel Prize winner Norman Borlaug. Cownie says the figures at Statuary Hall in the U.S. Capitol are rarely changed, and that makes this situation unique. “So to have this statue coming back to Iowa, going back to Mt. Pleasant to be displayed in a public setting at Iowa Wesleyan, combines the highest levels of artistic and historical significance in one piece for all Iowans, and those out of state, to come and experience and enjoy,” Cownie says. 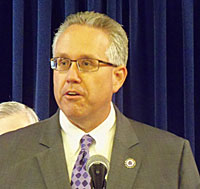 Harlan became president of Iowa Wesleyan in 1853 before being elected to the U.S. Senate in 1855. Current Iowa Wesleyan president, Steven Titus, was on hand for the announcement of the unveiling date for the Harlan statue. “While James Harlan and his legacy belong to all of Iowa, we at Iowa Wesleyan are honored to welcome his statue to a place he himself called home,” Titus says.

Harlan also served as Secretary of the Interior and was considered a close friend and advisor to President Abraham Lincoln. Harlan’s daughter, Mary, married Robert Todd Lincoln, the 16th president’s son, and the couple’s Mount Pleasant home sits on the north end of the Iowa Wesleyan campus and is known as the Harlan-Lincoln House. Harlan died in Mount Pleasant in 1899 and is buried in Forest Home Cemetery.

Titus says the actual statue has been in Mt. Pleasant for the past several months. “Senator Harlan arrived on March 29th and has been on the campus, neatly and safely tucked away on campus since that time,” Titus says. “Over the summer we have made preparations for the statue. In fact he will appear right before what’s called the University Chapel — a building that he built while he was there.”

The statue has been inside and will now sit outside, but Titus says that will not be an issue. “And really there is nothing that needs to be done. What we do need to attend to is to make sure that we do maintain it now that it is outside. And so it’s equipped and able to be outside with no threat,” Titus says.

The statue will be unveiled on Thursday August 28th at 2 p.m. Titus and Cownie spokes at the Governor’s weekly news conference.