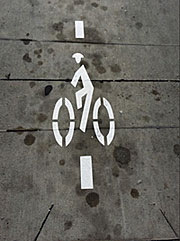 Sign shows bikers in Ames where to stop to be detected by traffic signals.

“In an older system, there was typically a cut in the concrete where inductive wire was looped through. And the new signals use radar technology and they are much more accurate and less likely to be impacted by outside factors,” Gwiasda says.

The wires in the pavement detect the metal in cars, but do not detect bikes and often motorcycles, so they don’t switch the traffic lights to green. “The old system required a bike rider to dismount the bike or to haul the bike up onto the curb to hit the ped button, and then make his or her way back down onto the street,” Gwiasda explains. “So, it was disruptive to the bike rider and it kept them out of the flow of traffic.”

Gwiasda says they decided to use the new technology because of its ability to identify bikes, but it also has some other advantages.

“Not only does the radar work better — it’s not influenced by factors such as fog or rain or snow — but also we don’t have to cut into the pavement anymore. And we clearly would prefer not to cut into newly poured concrete, so the system is a win-win for everybody,” Gwiasda says.

More new signals will be added to city streets as changes are made. Gwiasda says they systems are budgeted into their plans and they are now being used whenever they replace a signal. The new systems cost around $20,000. There are marking on the pavement in the intersections where the new signals are used to show bicyclists where to stop to be seen by the radar.