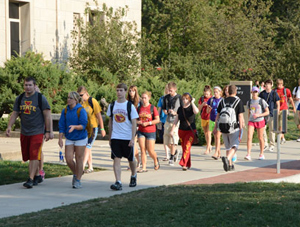 Iowa State University has record-high enrollment of more than 34,000 students for the fall semester, which starts next week.

Annette Hacker, a spokeswoman for the university, says ISU officials have leased additional living space off-campus for over 1,000 students because the residence halls are jam-packed, with some students living in the dens in the dorms.

“They’re nice big spaces, which students like, but ideally when spring semester comes we want to relocate those students to permanent spaces so that we can again use the dens for community gatherings within the residence halls, because that community space is important, too,” Hacker says. Almost 12,500 students have signed up to live in the university’s residence halls.

The University of Iowa’s enrollment is expected to be among the largest in history, but officials say it won’t set a record. First-year students, along with those transferring to the University of Iowa, are invited to a “Kickoff at Kinnick” event this evening at 7:30. Students will gather in the stadium, learn about Hawkeye traditions and pose for a mass picture of the Class of 2018. The event, which will include faculty and staff, will end with fireworks at about 9:30.

Enrollment projections from the University of Northern Iowa are not available. Last fall over 12,000 students were enrolled at UNI.