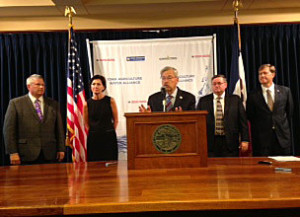 “A simplistic regulatory scheme, touted by some, will not significantly improve water quality in this state, nor will another marketing campaign touting the importance of agriculture,” Leeds says. “Serious matters demand serious efforts and we are commited to achieving significant results.”

The Iowa Agriculture Water Alliance is a joint effort of the Soybean Association, the Iowa Corn Growers and the Iowa Pork Producers. Leaders of these groups say their new alliance will work to secure public and private financing for steps farmers take in their fields to reduce fertilizer and manure run-off.

“Many of us just got done working at the Iowa State Fair…greeting folks, talking about issues and many them came up and talked to us about quality of water and the impact that Iowa agriculture is having,” Leeds says. “We believe there are some of that is being spread by misinformation. We believe there are some who have a political agenda for a crisis, but what we’re about is having farmers understand that there are real concerns.”

“Farmers, like every audience, need to hear the message several times,” Leeds says. “And we believe that farmers have adopted many practices, but the reality is, we’ve got to do better.” 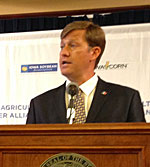 Sean McMahan will start September 15 as executive director of the new organization and he says part of his job will be explaining why farmers need “flexibility” to address these issues because every acre is different.

“There already is regulation in the livestock sector of agriculture, but I personally believe that regulation would not work when it comes to row crops,” McMahon says. “…Just here in Iowa, we have nearly 90,000 farms, so just the scale of regulation would be really challenging. You know, how would the DNR be able to send regulators to each and every farm and field?”

McMahon says farmers can save money if they more carefully target their fertilizer applications.

“I think if we can convince producers that they’ll enhance their profitability and their environmental performance simultaneously, we’ll really see an exponential increase in the rate of adoption for those practices,” McMahon says.

Governor Terry Branstad says computerzied systems on farm equipment can accomplish that goal, and keep fertizilier away from sensitive areas. Branstad invited McMahon and the ag groups to his office to publicly announce the formation of the Iowa Agriculture Water Alliance, but Branstad cautioned water quality problems will “not be solved in one or two years.” 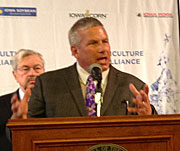 Bill Northey, a farmer from Spirit Lake who has been Iowa’s secretary of agriculture since 2007, said it will cost “billions” to address some of these issues.

“Farmers in Iowa have been very active in trying to control erosion over time,” Northey said. “We’re adding the water quality aspect to it.”

Iowa Citizens for Community Improvement and environmental groups have been pressing for additional state regulations and, in some instances, federal oversight of farm operations to police water quality issues.