You are here: Home / Agriculture / Emerald ash borer continues to move through the state with some help 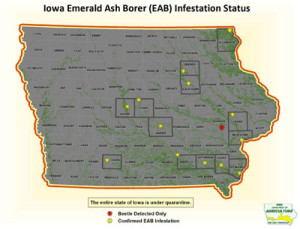 Story County has become the 13th in the state to be confirmed with an emerald ash borer (EAB) infestation. A homeowner in Story City found two larvae that have been confirmed to be the pest the burrows into, and eventually kills ash trees.

The state instituted a ban on moving hardwood firewood, ash logs, wood chips and ash tree nursery stock in February to try and slow the spread of the insect. State Forester Paul Tauke, says the continued discovery of EAB in new counties is due in part to people not following the ban.

“I think that is always a factor, we would always like the public to follow our advice on spreading exotic invasive pests through firewood,” Tauke says.

The beetle doesn’t travel very far on its own and that is why the state banned the movement of firewood. Tauke says if people had heeded the message to not move firewood earlier the state would probably be in a little better shape when it comes to slowing the movement. There’s no treatment to kill off the bugs once they start burrowing under a tree’s bark.

Tauke says the public sometimes doesn’t heed warnings until things become a crisis situation. “And you know, hindsight is always better than foresight when it comes to this kind of stuff,” Tauke says. “But hopefully people will take a lesson from EAB and not move that firewood, and hopefully not move it around any more than it already has been. And hopefully not move any other pests around through the movement of firewood.”

Story City officials have inventoried the trees in the community and will continue to monitor and address any problems with ash trees. More information is available about EAB and other pests threatening Iowa’s tree population is available at: www.IowaTreePests.com.