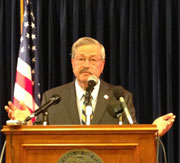 Governor Terry Branstad says Iowa’s Caucuses shouldn’t be tainted by a bribery scandal involving the former state senator who now admits he was paid $73,000 to switch his support from Michele Bachmann to Ron Paul in the closing days of the 2012 Caucus campaign.

“When we find wrong-doing, we investigate it and we take action to make sure that justice is done,” Branstad said.

Kent Sorenson of Milo resigned from the senate nearly a year ago after an investigation launched by the Iowa Senate Ethics Committee concluded it was “manifestly clear” Sorenson had been paid to work for Bachmann. Last week the U.S. Justice Department announced Sorenson had pleaded guilty to taking money from Ron Paul’s campaign. Branstad notes the state investigation came first.

“I think it’s a tribute to the political system of our state and to the senate itself — both the ethics committee and minority leader Bill Dix — that they took the action that they did,” Branstad said this morning.

Sorenson signed on as Bachmann’s Iowa campaign chairman in early 2011. Sorenson has now admitted in his guilty plea that he began negotiating with the Paul campaign in the fall of that year to make the switch to Paul’s camp and get paid. In the spring of 2012 three Democrats and one Republican on the state Senate Ethics Committee voted to launch an investigation of Sorenson’s activities.

“The fact that Iowa has taken appropriate action to protect the integrity of our caucuses and to keep out inappriate actions speaks out strongly that we do things differently here,” Branstad said.

In 2008, Sorenson was elected to one term in the Iowa House, then he won a seat in the Iowa Senate in 2010. Sorenson’s case has had ripple effects in Kentucky, where the political director for Ron Paul’s 2012 presidential campaign had been running on Senate Republican Leader Mitch McConnell’s reelection effort. Jesse Benton, who is also married to Ron Paul’s granddaughter, resigned last week from the McConnell campaign. Benton said any suggestion that he was involved in Sorenson’s bribery scandal was “untrue,” but he resigned to ensure McConnell’s campaign wasn’t damaged by “rumors” about the case.