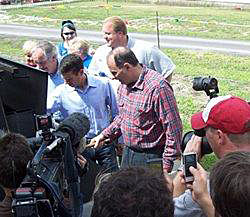 In June, the Iowa Democratic Party held a banquet to honor Harkin, who is retiring from the senate at the end of the year. Clinton sent a video for that event.

“Tom and Ruth have been wonderful friends of Bill’s and mine for years,” Clinton said.

The couples first met on the 1992 campaign trail, when both Bill Clinton and Tom Harkin were running for president. Harkin endorsed Clinton when he dropped out of the race. During her recorded speech back in June, the former first lady praised Harkin’s “Midwestern common sense” and his work on the 1992 Americans with Disabilities Act.”

“Thanks for your leadership and for your friendship,” Clinton said to conclude the brief video.

While Senator Harkin did not endorse a candidate running in Iowa’s 2008 Caucuses, Ruth Harkin did publicly back Hillary Clinton and, just over a year ago, Ruth Harkin said Iowa’s 2016 Caucuses would be “the launch pad” for the White House.

“Some might say we are awfully ambitious in our aim to elect a woman to the White House in 2016,” Ruth Harkin said in August of 2013. “Let’s be clear: this is just the beginning of our ambition.”

Harkin was speaking at an event in Des Moines that was organized by Emily’s List, a group that supports Democratic women running for office.

This past January a group calling itself “Ready for Hillary” held an event in Iowa. Obama supporters from 2008 as well as Clinton backers were there. Jerry Crawford, the co-chair of Clinton’s 2008 Iowa campaign, was asked what “pitfalls” Clinton should avoid if she runs again.

“I don’t really look at it that way. Hillary Clinton got more votes than any prior candidate for president in the history of the Iowa Caucuses,” Crawford said. “It’s just that Obama got more.”

Clinton’s last appearance in Iowa was on Caucus Night, January 3, 2008, when she finished in third place, with 29 percent of the vote, behind Obama and John Edwards.

“This is a great night for Democrats. We have seen an unprecedented turnout here in Iowa and that is good news because today we’re sending a clear message that we are going to have change,” Clinton said. “And that change will be a Democratic president in the White House in 2009.”

Clinton thanked her 2008 Iowa supporters for their “best efforts” on her behalf.

“I am as ready as I can be after having had this incredible experience here in Iowa, starting out a long time ago,” Clinton said, drawing laughter from the crowd, “and making this journey with so many people who have become my friends and who I am so grateful for their hard work and support.”

One of those Iowa supporters was Debbie Noe of West Des Moines, who was a precinct captain for Clinton.

“People are going to be excited to see her again,” Noe says.

Noe, her husband and their 10-year-old son plan to attend Sunday’s Steak Fry, but Noe is by no means ready to start pounding the pavement for a 2016 presidential candidate.

“I think people are just tired right now and waiting to see what happens with the state campaigns and this next election (in 2014),” Noe says.

Danny Homan of Sioux City first met the Clintons in late 1991 when he drove the couple through an Iowa blizzard.

“I have a fondness for President Clintona and First Lady Clinton and I grew to respect her even more when she was running for president seven years ago,” Homan says.

Homan, who is president of AFSCME Council 61 — the union that represents the largest share of employees in state government, says he hopes Sunday’s Steak Fry is more about the host than the high-profile guests, however.

“I’m going more for Senator Harkin,” Homan says. “It’s just a bonus that the president and first lady will be there also.”

Nancy Bobo says it will be a “big deal” to see the Clintons, but as someone with a hearing problem, she’s going to the Steak Fry to show her “reverence” for Harkin’s work on the 1992 Americans with Disabilities Act.

“So I hope that, as much as anything, it’s a fine tribute to Tom Harkin and all he’s done for us because he’s done a tremendous amount of work for Iowans,” Bobo says, “and our lives have changed because of it.”

Bobo, who started working for the Obama campaign in early 2007, suggests the decision for Democrats in 2016 may boil down to a choice between Hillary Clinton and Elizabeth Warren, the Massachusetts senator who has become a favorite of the party’s progressive wing.

“I think we have two very capable candidates and two very different candidates in these women,” Bobo says. “…The next six months are going to tell us a lot.”

There’s a lot of activity for the next couple of days as the event’s organizers prepare for a crowd of thousands on Sunday. That’s a far cry from the first Steak Fry in 1972 when Joan Kiernan hosted 53 people at her family’s farm in Madison County. Tickets that year were $2.

“It was something very special and it started there on our farm,” Kiernan says. “It’s different now. It’s so large.”

“One would never imagine that it was going to get that big,” Kiernan says, with a laugh.

In addition to the thousands who will pay $30 for a ticket to the 37th and final Harkin Steak Fry on Sunday afternoon, this has become a reunion weekend for people who’ve worked for Harkin in his congressional offices or on his campaigns.  By this morning, nearly 250 people had paid $45 for a ticket to the Harkin Staff Reunion, including a man who worked on Harkin’s first, unsuccessful campaign for congress in 1972. Harkin was elected to the U.S. House in 1974 and he won his seat in the Senate in 1984.

Some of Harkin’s staff of the past worked on Tom Vilsack’s short-lived 2008 presidential campaign as well. Tom and Christie Vilsack plan to attend the reunion organized for that group this weekend. Tom and Ruth Harkin will attend the Harkin Staff Reunion on Saturday.