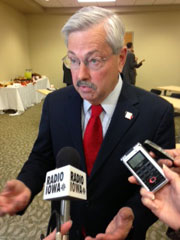 Governor Terry Branstad says it’s time to give judges the authority to order electronic surveillance of some of the men and women who are accused of stalking or domestic abuse in Iowa.

“I think it makes sense to have GPS tracking of people that have a no-contact order,” Branstad says.

The governor doesn’t envision putting an electronic bracelet on every Iowan who is the subject of a “no contact” order, but he says judges should have the discretion to order it in certain cases.

“One of the big tragedies that we’ve had occur is when somebody that’s had a no-contact order violates it and then murders their estranged spouse or partner or whatever,” Branstad says. “And this would be a way to make sure that you knew where they were and that they were not violating the no-contact order.”

There have been 253 domestic abuse homicides in Iowa in the past 19 years. Advocates for domestic abuse victims say electronic monitoring isn’t effective and accused abuser who are deemed a threat should be kept behind bars until trial. In addition to electronic monitoring for accused abusers, Branstad says those convicted of violent sexual crimes should be required to serve out their full prison sentence, too.

“If they fall in that category of being a violent sexual predator, they would not be eligible for ‘good time’ and ‘honor time,'” Branstad says.

Branstad cites the 2013 case involving Michael Klunder (rhymes with “thunder”) of Stratford. Klunder had been released early from prison after serving about half his sentence for kidnapping two toddlers. Klunder kidnapped two girls in Dayton and one escaped, but Klunder killed 15-year-old Kathlynn Shepard before hanging himself. The Republican-led House this spring passed a bill to get rid of time-off-for-good-behavior for violence sex offenders, but the bill failed to pass the Senate where Democrats hold majority control.