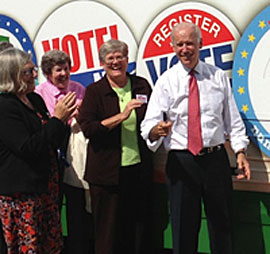 Vice President Joe Biden and “Nuns on the Bus.”

Biden’s speech focused mostly on economic issues, with a populist theme reminiscent of his two campaigns for the White House. Biden railed against U.S. corporations that are relocating overseas to avoid taxes and CEOs who earn salaries exponentially greater than their employees.

“And it’s time for a fair tax structure, one that values paychecks as much as earned income and clipping dividends,” Biden said, to applause. “One that values hard work as much as inherited wealth.”

Biden called the federal minimum wage a long-term “consensus” between Democrats and Republicans that has been derailed in recent years by the focus from both parties  on promoting Wall Street and corporations by reducing taxes and regulations.

“America’s better positioned to lead than any time in the last 35 years, but we’ve got to deal the middle class back in,” Biden said. “As they come back, we’ve got to have the bargain restored.” 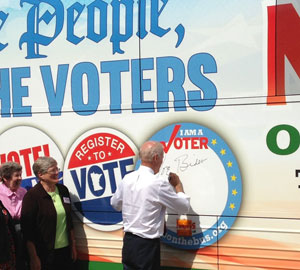 About 250 people gathered for the rally held at the steps of the Iowa Capitol. Sister Simone Campbell is the leader of the so-called “Nuns on the Bus” tour that will stop in 36 cities between now and Election Day.

“With the vice president, we share a faith and a commitment to our democracy,” Campbell said, “to making democracy work for the 100 percent.” 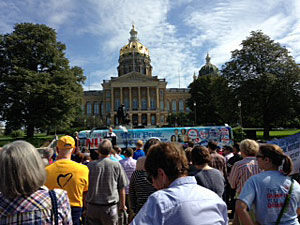 Vice President Biden spoke on the west steps of the Iowa Capitol.

Biden, who is Catholic, said it was an “honor” for him to pay tribute to the efforts of the “Nuns on the Bus.”

“Conscience and passion matter in every endeavor,” Biden said, “and I know no group of people who bring a greater sense of justice and passion to what they do.”

Biden lamented the growing gap between wealthy Americans and the rest of the country and he warned the middle class was in “real trouble.” But Biden suggested it’s “not rocket science” to find ways to address the growth of income inequality in America.

“This isn’t a populist rant,” Biden said. “This is about how you build America.”

Biden’s appearance came less than 72 hours after Hillary Clinton’s turn on Iowa’s political stage stoked speculation about her decision on running for president in 2016. Biden rode on the bus with the group of politically active nuns, including nuns from Iowa, to a small Des Moines cafe for lunch. Biden signed the side of the bus before going into the eatery, where the Iowa Democratic Party’s chairman and some of the party’s staff were also waiting to see Biden.

Biden answered one question from the media during his Iowa stop. The vice president was asked about a leading general who said sending troops into Iraq would be an option if the current plan of attack fails to turn back Islamic militants there. Biden told reporters those sorts of decisions will come “based on how the effort goes,” but Biden said the current “conclusion” is hat troops “are not needed now” on the ground.

(a small segment in the middle was lost)