You are here: Home / Crime / Courts / Northeast Iowa man accused of locking up 5 kids for hours 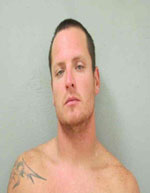 A northeast Iowa man is facing a long list of charges for locking five young children in a room. Fayette County Sheriff’s deputies were sent to a home in Westgate last Friday morning and heard a man and woman yelling at each other inside. They also saw several small children in a window crying.

The deputies discovered the 5 children, between 3 and 9 years of age, had been locked in a bedroom. The boyfriend of the children’s mother was arrested and charged with five counts of false imprisonment and five counts of child endangerment.

Twenty-eight-year-old Joshua Steinbronn is accused of locking the children in a room, on several occasions, sometimes for over 24 hours — denying them food and a restroom. The children told deputies they had to urinate in cups or on the floor. The five kids have been turned over to the Department of Human Services.

The mother of the children has not been charged, but the case remains under investigation. Two people who were renting a room in the home, 22-year-old Megan Owens and 20-year-old Traeton Wilharm, were cited for possession of drug paraphernalia. Steinbronn is out of jail after posting bond. He’s under a court order not to have contact with the children.