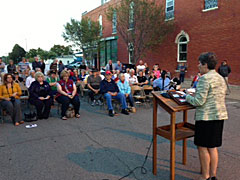 “So 99 counties in 44 days,” Ernst said in Newton last night. “Pretty aggressive, pretty remarkable, but we’re gonna do it.”

Ernst calls it her “Iowa Knows Best” tour, a way to highlight her opponent’s eight-year career as a member of congress and her own work as a county official and a state senator.

“Because I believe that Iowans know what is best for Iowa, not politicians in Washington, D.C.,” Ernst said.

Ernst started Sunday with an appearance in Black Hawk County. She spoke in Jasper County last night, to a crowd of about 80 Republicans who gathered for a street party in Newton. Ernst cast herself as a candidate who has withstood a barrage of negative advertising from outside groups.

“They came up June 4, right after the primary, and they’ve been hitting me with negative ad after negative ad after negative ad. And you know what? This southwest Iowa farm girl is still tied with that eight-year congressman in the polls,” Ernst said, to applause from the crowd. “So I think we’re seeing through all of this and we’ll see who really does care about Iowans and the direction that our country goes.”

Braley made an appearance on the University of Iowa campus yesterday, but the event was not open to the public. The Braley campaign and University of Iowa officials invited a small group of students to a roundtable discussion with Braley.

The two candidates will face-off in their first debate of the season on Sunday at Simpson College in Indianola. It will be broadcast live by KCCI, a Des Moines TV station, and livestreamed on The Des Moines Register’s website.