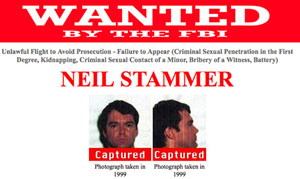 A federal grand jury in Iowa has returned an indictment against a 48-year-old man who was caught in Asia this summer after being on the FBI’s “Most Wanted” list for 14 years.

Neil Stammer owned a magic shop in New Mexico when he was arrested in 1999 and charged with kidnapping and child sex abuse. He failed to show up for a court appearance and was declared a federal fugitive. The U.S. State Department recently used facial recognition software to cross-check passport photos with the FBI’s Most Wanted list and got a hit on Stammer.

Stammer was living in Nepal and going by the name Kevin John Hodges. News media in Nepal say that’s the name of a baby who died in 1972. Stammer is in a New Mexico prison, awaiting trial on the sex abuse and kidnapping charges, but now Stammer faces passport fraud and identity theft charges in federal court in Iowa. The U.S. Attorney for the Southern District of Iowa isn’t commenting on the case, but according to media accounts in Kathmandu, it appears Stammer lived in Des Moines after he left New Mexico. His fake passport listed Minneapolis as his hometown.