You are here: Home / News / Senator says she doesn’t ‘see a pathway’ for IWD director keeping job in 2015 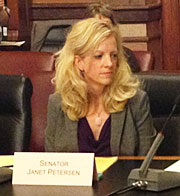 A Democrat in the Iowa Senate says some of Governor Terry Branstad’s top administrators may not be reconfirmed for their jobs.

Governors choose their state agency directors, but two-thirds of the state senate must vote “yes” to confirm the appointment. Senator Janet Petersen, a Democrat from Des Moines, says she doesn’t “see a pathway” for Teresa Wahlert to get reconfirmed as director of Iowa Workforce Development. Petersen cites the March incident in which 85 people who weren’t due unemployment benefits got them anyway and Wahlert directed staff not to discuss the computer glitch that caused the overpayment.

“Not only did she let down the business community who invests in the unemployment trust fund, but she also let down unemployed Iowans who count on the integrity of that firm,” Petersen says. “…I just don’t believe the state of Iowa should tolerate that type of leadership.”

Petersen, who is chair of the Senate Oversight Committee, says she doesn’t want to “name names,” but she’s hinting other Branstad administrators could lose confirmation votes in the senate next year.

“From the research that I have been doing, I believe there’ll be a number of administrations that might want to consider a different line of work,” Petersen says.

Petersen’s comments about whether Branstad’s top aides should remain in their jobs in 2015 suggests Senate Democrats are laying the groundwork for their approach to four more years of Branstad in the governor’s office. Branstad’s on the November ballot, seeking reelection to a sixth term. Even if Democrats were to lose majority control of the state senate, it would still require the votes of Democrats to reconfirm Branstad’s administrators. Thirty-two senators must vote “yes” on a governor’s appointment for that person to be confirmed for the job.