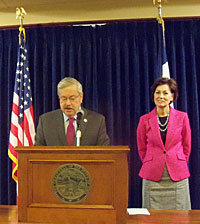 Iowa Governor Terry Branstad, says a law that puts restrictions on the sale of eggs in California will not stand the long-term legal test after a federal judge dismissed a lawsuit seeking to overturn the law. “This is not right, it’s not fair, and that’s why we joined with Missouri and several other states in this lawsuit. One way or another, we need to find a way to prevent this from continuing to happen,” Branstad says.

The California law says the state can only sell eggs from chickens who are held in larger cages — which opponents say increases the expense of producing the eggs. Iowa is the top egg-producing state in the nation, and Branstad says Iowa and other states shouldn’t have to fight against California to be able to sell eggs there.

“It’s bad enough trying to break down the barriers to trade with the European Union and with other parts of the world. We don’t want a trade war in America, but we think California is dead wrong on this,” according to Branstad. “You know, I haven’t practiced law for a long time, but I can tell you basic Constitutional law says the Interstate Commerce clause of the United States Constitution is there to prevent barriers to trade from other states.”

Branstad, a Republican, isn’t sure if the other states will continue to push the fight in court or try to take other action to get California to change. “I think we are going to examine all the different options and alternatives on what to best doe — but it is so blatant and so obviously unconstitutional that eventually it’s not doing to stand. It can’t stand, it goes against the very tenants of the Constitution of the United States,” Branstad says.

On another issue during his weekly meeting with reporters, the governor says there won’t be a photo opportunity of him and the lieutenant governor voting on Election Day this year. “I’ve already cast my absentee ballot. We both did a video encouraging others to vote by absentee ballot. And we are running well ahead of what we did in 2010, so the margin that the Democrats have had on early voting has diminished,” Branstad says. “So, I’m hoping that as we get closer to Election Day we can make even greater progress.”

Branstad admits Republicans have been behind in past elections in getting out the early vote. “This was an area that we needed to do some work, and we encouraged the party and we’ve gotten great help in that effort, but we are also trying to do our part,” Branstad says.

The governor says the Election Day photo opportunity was a good one to draw attention, though he says there’s a positive to voting early. “It’s an opportunity for us to spend more time actually with the voters encouraging others to get out to voter,” Branstad says. “The more people we have vote early, it means we have a smaller universe to work on on Election Day, and hopefully we can be even more effective in getting other people out to vote.