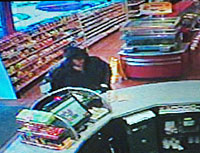 This is the person buying the mystery Hot Lotto ticket.

The Iowa Division of Criminal Investigation released video from a convenience store today as they seek out more information from the public in trying to find the person who bought a multi-million dollar winning lottery ticket that ended up never being cashed.

The Hot Lotto ticket had the winning numbers for a $16 million jackpot in the December 29th, 2010 drawing.

Almost one year later just before the ticket was to expire, a lawyer named Crawford Shaw tried to cash in the ticket on behalf of a trust based in Belize known as Haxam Investments. Shaw eventually withdrew the claim on the ticket after refusing to give out more information on his clients.

DCI assistant director Dave Jobes says they still want to know the identity of the person who bought the ticket at a Quick Trip store along I-80 in Des Moines. 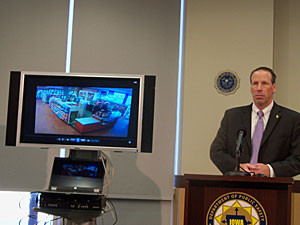 “We’ve developed a lot of good investigative information, its led us to pursue some additional leads in the Houston, Texas area. But before we can tie everything together and before we can really figure out the full story behind this case, we need to identify that ticket purchaser,” Jobes says.

Video from inside the convenience store shows what appears to be a man wearing winter clothes buying the ticket and a hot dog. Jobes was asked how he would describe the man and  says he won’t elaborate on a description as they don’t want to taint anyone’s impression when they see the video.

Jobes says Crawford Shaw is cooperating. “I can’t get into details of that. I can tell you that he has ultimately agreed to cooperate with us and continues to be in contact with us,” Jobes says. He was asked if they have focused on Houston because Shaw has many business contacts there. “I think that’s a stretch at this point, that’s beyond what we know today,” Jobes says. “We are still trying to piece everything together and that’s why were are seeking the public’s help in identifying this person.”

Jobes says it is important to find and talk to the person seen in the video buying the ticket to close the case. “We have not reason to believe that the original ticket purchaser has done anything illegal at this point,” Jobes explains. “We simply don’t know how they are. We don’t know if they are a victim, we don’t know if they are a participant, we just don’t know at this point. And we can’t answer those questions until we get some additional leads and we get a better understanding of who that person was.”

The video released today shows the person from a couple of angles inside the store. Jobes was asked if there is video outside the store that shows the person leaving, and possibly a vehicle. He says he can’t answer that. “There are certain aspects of the investigation we are keeping confidential to protect the integrity of the case,” Jobes says.

The money from the jackpot was eventually given away in another Iowa Lottery contest. Jobes was asked why they are still pursuing the identity of the ticket purchaser. He says there are two reasons. “First, a fraud was perpetrated when someone tried to redeem the ticket fraudulently. From what we know at this point, they didn’t have a lawful claim to that jackpot and attempted to claim it anyway. That may prove to be different as we progress in the investigation — but from what we know now, that would be the case,” Jobes says. “The other reason to pursue it is we don’t know if something happened to the original ticket purchaser. We simply don’t know at this point.”

Jobes asks as many people as possible to view the video and see if they can identify anything about the person purchasing the ticket.

He then asks that they fill out this on-line survey: www.surveymonkey.com/s/7Z59VRZ-HOTLOTTO_TICKET_PURCAHASE_TIPLINE