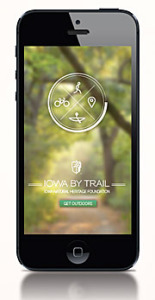 The Iowa Natural Heritage Foundation hopes to expand the availability of what has already become a popular trail app. Developers says more than 5,000 Iowans are using the “Iowa by Trail” application that contains information on 1,800 miles of trails in the state. The app has details on the location, distance, and type of trails, as well as points of interest close by.

Iowa Natural Heritage Foundation spokeswoman, Kerri Sorrell, says as far as she knows Iowa is the first state to have an all-inclusive trail application like this. “We hear it all the time that people want to get outdoors and discover the natural resources and areas that Iowa has to offer, they just don’t know how to do it or how to get there,” Sorrell says.

She believes it’s has a lot to do with the people in the state. ” I think it says a lot about Iowa’s connection with the land and with its natural surroundings.” The app became available for iPhone users this summer, and Sorrell, says the organization is working to bring the app to android devices.

“We think it’s a really great tool for people who are either experienced with trails or have never been on a trail before to get out and discover new things about their community, find places that they may have never traveled to before,” Sorrell says. The INHF was awarded a grant of $40,000 by the Wellmark Foundation toward the android phone effort. The money must be matched by mid-December.

If all goes as planned, Iowa by Trail should be available for all users early next year. Developers says the app has been used 56,000 times by iPhone owners alone since May.