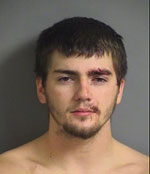 A young man from Manchester is facing burglary and assault charges for a weekend incident in Iowa City. Iowa City Police were sent to a home in the 600 block of Iowa Avenue Saturday night on the report of a man being stabbed with a knife.

Officers found the suspect, 20-year-old Austin T. Brown, was still in the home when they arrived. The officers deployed a Taser after Brown allegedly refused to drop a knife. The victim, who was cut on his face with a pocket knife, said Brown entered the home and began fighting with him for no reason.

Police said Brown was highly intoxicated and later had no recollection of much of the incident. He’s now facing felony charges that carry a punishment of up to 40 years in prison.