You are here: Home / News / Minnesota & Missouri Secretaries of State campaign with Democrat seeking the office in Iowa (AUDIO) 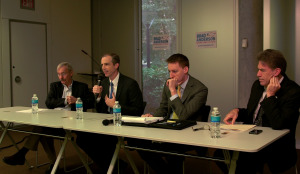 A group supporting Democrats running for secretary of state in Iowa and three other battleground states staged a “town hall meeting” in Des Moines today featuring the Democratic Secretaries of State from Missouri and Minnesota as well as the Democrat seeking the same office in Iowa.

Brad Anderson, a political consultant who was the manager of President Obama’s 2012 Iowa campaign, said he’s met with 75 of Iowa’s county auditors in the past couple of months and none have discussed party affiliation.

“The office should be approached in a non-partisan way, period,” Anderson said.

According to Anderson, a top issue for county election officials in Iowa is finding money to buy new polling equipment.

“And so when my opponent proposes expensive, new, unnecessary integrity measures such as signature verification or voter ID, he is not addressing the real concerns on the ground when I talk to the county auditors,” Anderson said.

Anderson’s Republican opponent is Paul Pate, the former Cedar Rapids mayor who served one term as secretary of state in the late 1990s. Pate supports requiring voters to show a photo ID and he’s called for purchasing signature verification software as a way to verify absentee ballots came from an eligible voter.

Jason Kander has been the State of Missouri’s secretary of state since January of 2013 and he joined Anderson in today’s event. Kander said secretaries of state should be “explicitly” non-partisan.

“I think about the role of a secretary of state, no matter which party they are, as being sort of an umpire, all right?” Kander asked. “It’s our job to call balls and strikes fairly, right? So to me it’s not about which party it benefits. It’s about is the person there as the ballots come in counting them fairly.”

And Kander took a shot at Anderson’s Republican opponent.

“Paul Pate who as far I know is the only secretary of state in Iowa history ever to be reprimanded for using his office for political purposes and running a political operation out of his office,” Kander said.

In 1998, Pate was ordered to pay the state $250 to compensate for the time a staff member in the secretary of state’s office spent conducting political business. Mark Ritchie, who has been Minnesota’s secretary of state since January of 2007, was the third participant in today’s event, but he did not mention Pate. Ritchie said the Bush versus Gore election in the year 2000 turned his attention to the challenges some Americans face in exercising their constitutional right to vote.

“I think a lot of us saw an election in Florida that seemed to be being manipulated at the administrative level, that there was something going on there,” Ritchie said. “…You see the kind of distrust of the elections process that grew out of that.”

The three Democrats discussed a number of issues during the 50-minute forum, including online voter registration. Ritchie said since the voter him or herself enters the information, the error rate is greatly reduced, plus studies show it saves county taxpayers about $1 per voter.

“People deserve to have elections that are easy to access and very difficult to scam, easy to vote, hard to manipulate,” said Ritchie, who is not seeking reelection.

The forum featuring the three Democrats was organized by the iVote campaign which is supporting Democrats running for secretary of state in Iowa, Colorado, Nevada and Ohio. Advisors to the iVote group worked on President Obama’s 2008 and 2012 presidential campaigns, as did Anderson.