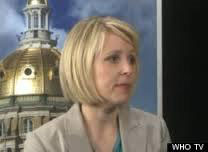 Kirsten Anderson during an appearance on WHO TV.

A woman who worked for Republicans in the Iowa Senate for five years has filed a lawsuit alleging she was repeatedly subjected to sexual harassment and was fired seven hours after she made a formal complaint to her boss. During an interview on WHO TV last year, Kirsten Anderson called the state senate a “toxic” place to work and she accused some senate staff and even some senators of harassing her and her female co-workers.

“Things that would make you blush,” Anderson said. “Things that you don’t want your daughter, your mother, your sister having to put up with and that sort of attitude about women — objectifying women — it has to change.”

Her former boss said last year that Anderson had been “given an opportunity to improve” during the last six months she worked as communications director for Senate Republicans, but was fired for “substandard work.” Anderson’s lawsuit was filed today and she’s seeking back pay and damages, plus she’s asking the court to order that state senators and their staffs undergo training as well as monitoring for three years to ensure the work environment is not hostile due to someone’s gender or sexual orientation. Anderson was one of 11 staff members hired to work for the 24 Republican members of the Iowa Senate.

“When you go to the workplace, you should have a safe environment,” Anderson said on WHO-TV in May of 2013. “Women, especially, should not have their body parts scrutinized, objectified…and those sorts of things were taking place at the capital.”

According to Anderson, voters “would not be happy” with the conduct of some of their state senators and during that TV interview 17 months ago, she hinted a lawsuit was coming.

Anderson’s lawsuit alleges two female senators witnessed some instances of harassment, but did nothing to stop it. One of those state senators, Joni Ernst, is running for the U.S. Senate. Ernst issued a personal statement saying she was unaware of the issues Anderson has raised but, if she had witnessed what Anderson has described in her lawsuit, Ernst said she “would have put a stop to it.” Ernst said she is “shocked to learn” she’s even mentioned in the lawsuit and Ernst concluded her statement by saying she hopes Anderson “is not being exploited ahead of the election.”

The Des Moines attorney Anderson hired is Michael Carroll, who specializes in employment law. Most of the tweets on his personal twitter account — @carollmikej — are about sports, but a tweet this past July linked to a story about an alleged Ernst “gaffe” and the previous month Carroll tweeted at Chuck Grassley, saying “a guy like Grassley could handle a little ribbing” from Bruce Braley about Grassley’s lack of a law degree. Braley is the Democrat running against Ernst for Iowa’s U.S. Senate seat.