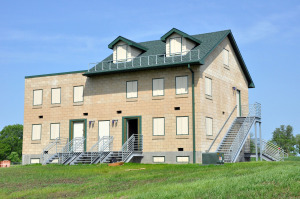 This house-like structure is part of the Iowa National Guard Urban Assault Course.

Guard spokesman Colonel Greg Hapgood says construction started on the Urban Assault Course in July 2013. “There are a number of different structures that can replicate the urban environment in which military and law enforcement operate and we can do a number of different training scenarios using the facility,” according to Hapgood.

The Iowa National Guard often shares facilities with other groups and Hapgood says that’ll be the case with this training area. “The Urban Assault Force facility was developed for military training and funded with federal dollars — about $2.7 million,” Hapgood says. “We have a number of law enforcement departments from across the midwest that train at Camp Dodge throughout the year, and this is one other facility that they can readily utilize.” 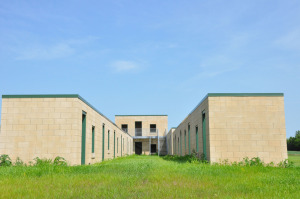 This building allows for a number of training scenarios.

The training is important for Iowa Guard members who may be deployed. “Over the past 13 years we’ve deployed more than 17,000 soldiers and airmen overseas for combat duty, and what our soldiers and airmen see routinely is a situation were operations are in cities, they are in urban areas,” Hapgood says, “so it’s incredibly important that they are able to familiarize themselves and train in that similar environment before they face an armed enemy.”

He says the course has several options for that training. “There’s something that replicates almost like an alleyway, there’s also kind of a large building — very similar to a large house — that has a number of different features, whether it’s blind corners, tunnels roof access,” Hapgood says. “We also have the ability to shoot live ammunition inside the building, as well as directly adjacent to the urban assault course. So, there’s a great deal of flexibility to train for a lot of scenarios.”

It also allows for training in different weather conditions. “This facility can be used year-round, it is outdoor, but there are some indoor portions as well,” Hapgood says. The course is a modern-day version of the World War One trench warfare course that was rediscovered earlier this year on the guard base near Johnston.