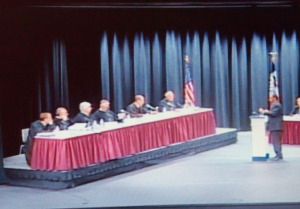 Michael Jacobsma presents his case to the Iowa Supreme Court.

Michael Jacobsma, a lawyer from Sioux Center, sued the city after receiving a speed camera ticket for going 67 miles-an-hour in a 55-mile-an-hour zone. Jacobsma represented himself before the justices, saying he was denied due process because the ticket was mailed to him after the photo was taken without an actual officer confirming he was driving.

Justice Brent Appel immediately questioned Jacobsma and said he had a chance to say someone else was driving in what is called a “nominated party” defense. Jacobsma responded that the only way he saw out of the ticket was if he had filed a stolen vehicle report.

Jacobsma was asked how this ordinance is different from the school bus law where a bus driver can take a license plate number and a ticket can be issued to the owner of the vehicle. He says the driver who receives the ticket after passing a school bus has a chance to say someone else was driving and get out of the ticket.

“So that’s why I think that the Sioux City ordinance is different, because it’s creating this strict liability and vicarious liability scheme that really doesn’t have to prove any relationship at all,” Jacobsma says. “You just are liable if you are the owner and period. Except they give this one very narrow circumstance if you file a stolen vehicle report.”

Justin Vondrak, and assistant city attorney for Sioux City, presented the argument in favor of the ordinance. Vondrak says the “nominated party” defense is spelled out on the back of the ticket given for the violation.

Justice Wiggins questioned why it wasn’t more clearly spelled out in the ordinance what it means to nominate someone, and suggested that it left it open to naming anyone. “Why couldn’t he name you as the party, you were driving the vehicle. If you read the Davenport ordinance, or if you read the Cedar Rapids ordinance or the Des Moines ordinance, it says ‘you nominate the person who was driving the vehicle.’ Why couldn’t I nominate you and then you have to go into court and says whether you have to pay it or not?,” Wiggins asked. Vondrak answered, “And your honor Mr. Jacobsma fully could have done that, but he didn’t do that.”

Wiggins continued the questioning about why the options are not spelled out in the ordinance. “Don’t you think due process requires the city to give notice of what they have to do and what presumptions are there and what presumptions are rebuttable,” Wiggins asked. “Isn’t that the essence of due process to given notice from the ordinance of what you do and what you don’t do?” Jacobsma replied,” I agree that the defendant needs to be given notice of what is going one, but he had the opportunity to nominate a party — if you read the ticket and found the second option would be to name a person and sign that.”

Vondrak says Jacobsma made no effort to nominate someone else. “Had Mr. Jacobsma come to that initial police hearing and said ‘Hey I wasn’t the driver, but John Adams was,’ at that point I guarantee with 100 percent certainty that our officer says ‘oh, isn’t it your lucky day, all you have to do is put John Adams’ name right here, we’ll send him the citation and you are free to go,'” Jacobsma said.

The justices heard the arguments last night at Buena Vista College in Storm Lake. They will make a ruling on the case sometime in the future.