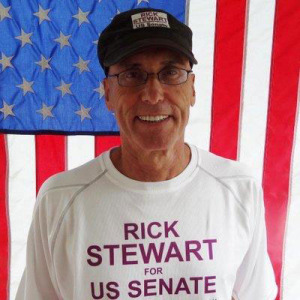 Rick Stewart, the independent candidate for Iowa’s U.S. Senate seat, did not meet the criteria for participation in Thursday’s night’s debate in Sioux City between Democratic candidate Bruce Braley and Joni Ernst, the Republican candidate. Stewart showed up anyway, with a mock-up of his living room in a cargo trailer parked outside of the auditorum at Morningside College where the debate was held.

“Since a lot of Iowans didn’t have a chance to come visit me for waffles on Sunday morning, I’ve got a sofa and some chairs and some homemade cookies and I invite Iowans to come in and sit down and chat about politics in general,” Stewart said.

Stewart, who lives in Cedar Rapids, was disappointed he wasn’t allowed to participate in the debate.

“I’m actually even more disappointed for the state of iowa. The voters didn’t get to see the candidates. They only got to see two of ’em,” Stewart says. “…I think most Iowans would have liked to see all of us, at least once.”

Six candidates are listed on Iowa’s 2014 General Election ballots in the race for Iowa’s U.S. Senate seat. In addition to Braley, Ernst and Stewart, there are two other independent candidates on the ballot. One is Bob Quast of Blue Grass, representing “Bob Quast for Term Limits.” The other is Ruth Smith of Lamoni, who has run before as a Democratic candidate for seats in the Iowa House and Senate, but is now running as an independent candidate for the U.S. Senate.

The sixth candidate, Libertarian Doug Butzier, died this week in a plane crash in Dubuque. At the start of last night’s debate between Braley and Ernst, both major party candidates offered their condolences to the Butzier family.