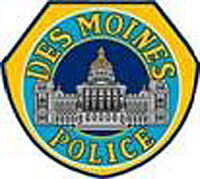 A young woman from central Iowa is charged in a fatal weekend hit-and-run accident. Des Moines police were called to an eastside street on Saturday morning and found the body of 55-year-old Kenneth Wallace in the road.

Evidence indicated a hit and run, including a license plate. Officers traced the plate to a pickup truck and later, 20-year-old Ashley Brown of Des Moines, turned herself in and reportedly admitted to being the driver. She’s charged with leaving the scene of an accident resulting in death and no insurance.