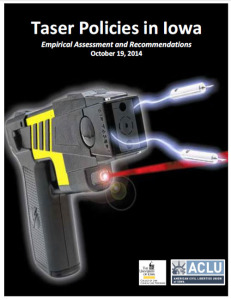 A two-year study by the Iowa ACLU and the University of Iowa College of Law Clinic has found no standard set of guidelines for Iowa law officers when it comes to using tasers. The devices use electrical charges to try and bring people under control.

U-I Law Clinic professor, Nathan Miller, help conduct the study of the taser regulations for law officers in all 99 counties and several cities.

Miller says they were surprised to find no standard state policy guidelines. “You can drive from one part of Iowa to another and find yourself in places where the law enforcement officials have completely different limits on when and how and when they can use tasers,” he says.

Miller says there needs to be a discussion on some broad guidelines for using the weapons. “On the one hand you can think of them as just replacements for deadly force.,” Miller says, “On the other end of the spectrum you can think about them being used against individuals who are already restrained, or who are being passive and not posing any physical threat. And I would really like us to focus in on where do we put tasers in that continuum. Should they be closer to where there is a physical threat? Or should we passive and unresisting?”

He would also like to see more focused guidelines for Taser use against those who are at a higher risk of suffering problems. “You would expect to see things like the use of tasers on women who are pregnant or on juveniles or the elderly to have more or less uniform treatment across the state — and we did not see that,” according to Millers.

While the weapons are supposed to be non-deadly, Miller says at least two people in Iowa have died immediately after law enforcement used tasers on them. “We’ve seen more than 500 deaths from tasers in the United States between 2001 and 2013. But event when they are not fatal, they really present a number of physical risks, even to healthy people. And those risks are of course exacerbated when you are talking about vulnerable folks like pregnant women, children, the elderly, the mentally ill,” Miller says.

Miller says the expanded use of tasers has put Iowa in a position that many other states are also in. “There are no national and very few statewide policies on this, but one of the things that’s happening, as tasers are used by more and more law enforcement agencies, they are studied more and more, and we are coming to a better understand of the risks that they pose,” Miller says. “And so, I think the time is right to have a statewide conversation about what uniform taser policies we might want to adopt,” Miller says.

He says Iowa’s legislature should consider adopting statewide guidelines for using the devices before more problems develop.  Miller says a standard policy would benefit both citizens and law enforcement.

The report found more than 265 Iowa law enforcement agencies are currently using tasers, and that number will increase as state agents under the jurisdiction of the Iowa Department of Public Safety will soon also carry tasers.

See more about the use of tasers in Iowa here: Taser report PDF