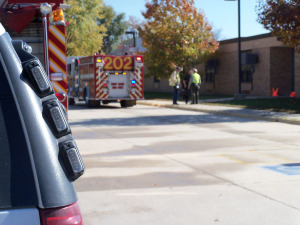 Fire forced the evacuation of the Bunger Middle School in Evansdale.

Fire forced the evacuation and early dismissal of students at a Waterloo-area middle school today.

Firefighters were called to Bunger Middle School in Evansdale when a school resource officer noticed smoke in a hallway. Evansdale Fire Chief Kent Smock says the school’s nearly 400 students and 50 faculty members were evacuated safely and taken to a nearby church.

When firefighters arrived, Smock says they encountered heavy smoke in a school hallway. “It took a while to find the (source of the) fire simply because we had to go through so many rooms and you couldn’t see anything inside,” Smock said. Because there were so many rooms to check, Smock said fire crews from nearby Waterloo, Raymond and Gilbertville were called in to assistance.

The fire was eventually discovered in a girl’s restroom and was quickly extinguished. Because of the type of fire and the amount of damage to the school, the State Fire Marshal is being called in to help determine the cause. “There’s extensive fire damage in that bathroom, but the fire damage was confined to that bathroom. Probably 50 percent of the school has some pretty extensive smoke damage, while the rest has minor to moderate smoke damage,” Smock said.

Classes at Bunger were called off for the day around 11 a.m. There is no school at Bunger on Thursday or Friday this week, due to conferences. Waterloo School officials expect classes to resume at the Evansdale school, as scheduled, on Monday.