You are here: Home / News / Multimillion dollar bridge between Iowa and Nebraska ready to open 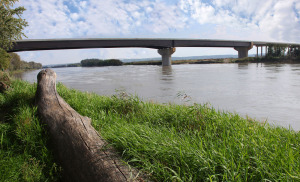 After months of work, this bridge connecting Iowa and Nebraska is opening.

A new bridge is opening today connecting southwest Iowa and southeast Nebraska. Officials say completion of the project not only eases travel for motorists but will encourage economic development between the states for years to come.

Scott Nixon, a construction engineer with the Iowa Department of Transportation, says it’s been a lengthy, expensive venture. “The total project with Nebraska costs and Iowa costs combined is about $115 million,” Nixon says. “The bridge itself was 61 million.”

Construction began in January of 2012 so it’s been just two months shy of three years to complete. The new route includes about 7 miles of newly-constructed 4-lane divided highway extending west of the U.S. Highway 34 interchange with Interstate 29 near Glenwood, Iowa, to U.S. Highway 75 between Plattsmouth and Bellevue, Nebraska.

The bridge sits on 17 concrete and steel piers. “It was a challenge working in the river,” Nixon says. “The contractor started working on the river in early ’12 and they were still working in late 2013. It was over a year to get the river piers up.”