You are here: Home / News / Not all vegetables and greens can go in your yard waste bag 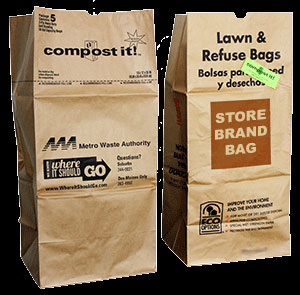 Many Iowans are launching into the fall chore of raking leaves and some residents are stuffing other things into those yard waste bags that can’t be composted.

Leslie Irlbeck, spokeswoman for the Des Moines-based Metro Waste Authority, says only vegetative waste should be going into those big brown bags.

“All of those leaves that are dropping that we all have to rake up, in addition to branches that might be coming down, or if you’re clearing out a garden as the weather gets cooler, the items that were in that garden can be tossed in the yard waste bag as well,” according to Irlbeck.

Items like rocks, chunks of concrete or ceramic pots should not be included, she says, and don’t put dirt in yard waste bags, either. If items from the garden or the grocery’s produce section have made it as far as your kitchen but didn’t get eaten in time, Irlbeck says they, too, probably ought to just go into the trash.

“Anything like if you had gone out of town and came back and had some tomatoes or cucumbers or other vegetables that had gone bad, those certainly could be included,” Irlbeck says. “Once it gets intermixed with other food in your fridge or on your plate, the best place for it is the garbage.”

While other products that are compostable are growing in popularity, despite the labeling, she says they’re not to be mixed in with compostable yard waste like leaves. Irlbeck says, “One of the things that has caused confusion lately is, when you go to a restaurant and you have a to-go box, sometimes those are being stated as compostable but the best place for those is actually in the garbage.”

She says many other to-go items like cups, utensils and packaging that claim to be compostable are still made from a form of plastic. Nearly 2,000 tons of trash daily ends up at the landfill in eastern Polk County, or about 18-percent of all of Iowa’s annual waste.