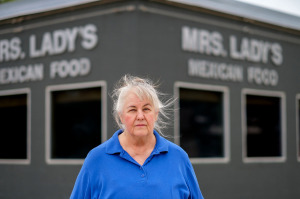 Carole Hinders in front of her restaurant.

A restaurant owner in northwest Iowa has landed in the national news spotlight over her fight with the federal government. Carole Hinders has operated Mrs. Lady’s Mexican Food in Arnolds Park for 38 years.

On May 22nd of last year, she says her life was turned upside down. “I got a knock on the door and it was two IRS agents who informed me they had closed my business bank account and seized all my money, which was almost $33,000,” Hinders said. The restaurant only accepts cash, which means Hinders makes frequent trips to the bank to avoid having large sums of money in the business.

Larry Salzman is with Institute for Justice, a Washington, D.C.-based public interest law firm that’s helping Hinders with her case.

The Institute for Justice produced a video telling Hinders’ story. “It’s been a year from Hell,” Hinders said in the video. “I decided to fight this fight because I didn’t do anything wrong. They took my money and I don’t think they should have the right to do that.”

The law firm reports federal law enforcement agencies — using civil forfeiture — can take cash, cars and other property without charging the property owner with a crime. The 67-year-old Hinders said she received no warning from either her bank or the government before her money was taken.

Since then, she’s borrowed money and used credit cards to pay bills and keep her restaurant in business. The New York Times recently featured a story about Hinders’ plight on its front page. The Institute for Justice analyzed civil forfeiture, or “structuring,” data from the I.R.S., and determined the feds made 639 seizures in 2012, up from 114 in 2005.

Only one in five was prosecuted as a criminal structuring case.

Photo courtesy of Institute for Justice