You are here: Home / News / Democrat Hatch says his campaign ‘is about doing the impossible’ (AUDIO)

Democratic gubernatorial candidate Jack Hatch and his running mate Monica Vernon kicked off a 37-city tour of the state with a rally in Des Moines last night. Hatch embraced the underdog role in his race against Republican Governor Terry Branstad. 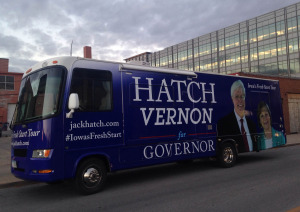 “It’s not about soundbites,” Hatch said. “What’s happened to this country when we trade soundbites and think that they’re a platform for governing our state?”

During last night’s rally a local performer sang his version of a song that he joked was titled: “End the Reign of Terry”.

Photos courtesy of the Hatch campaign.