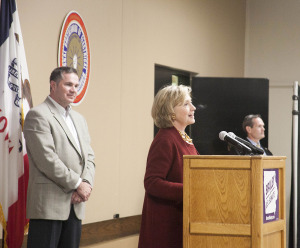 “This race comes down to one question about all others: Who’s on your side?'” Clinton said, and people in the crowd responded: “Bruce.”

Clinton acknowledged she was “talking to the choir” about Braley’s candidacy and she urged the crowd to do everything they could in the next six days to help Braley win a six-year term in the Senate.

Braley is in a tight race with Republican Joni Ernst and Clinton criticized Ernst’s economic plans, including her opposition to a federal minimum wage, and Ernst’s willingness to consider privatizing Social Security.

“Why is the race so close and why are we here, getting everybody ginned up to go out and work?” Clinton said. “Well, because you know there is a flood of unaccountable outside money trying to muddy the waters here in Iowa and drown out your voices.” 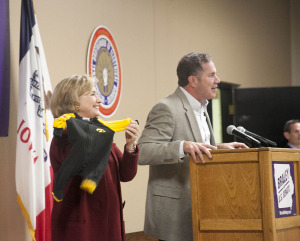 Bruce Braley presented Hillary Clinton with a Hawkeye outfit for her grandbaby.

Ernst would be the first woman elected to congress from Iowa, but Clinton suggested Ernst’s stand on certain issues, like abortion, put her out of step with the mainstream.

“It’s not enough to be a woman. You have to be committed to expand rights and opportunities for all women,” Clinton said, to extended cheers and applause from the crowd.

And Clinton criticized Ernst for not being willing to “answer the tough questions” from editorial writers for The Cedar Rapids Gazette, The Dubuque Telegraph Herald and The Des Moines Register.

“It truly seems like it should be disqualifying in Iowa, of all states, to avoid answering questions,” Clinton said.

According to Clinton, Braley has withstood “a withering barrage of negative ads and innuendo” from outside groups supporting Ernst.

“Don’t let anybody hide behind outside money and negative ads,” Clinton said.

Clinton is campaigning with Braley in Davenport this evening. A spokesman for the Iowa Republican Party dismissed Clinton as “out of touch” with small business owners and entrepreneurs for suggesting earlier this week that corporations and businesses don’t create jobs, while the Iowa GOP spokesman stressed that Ernst supports “pro-growth” policies that help “job creators.”