You are here: Home / News / Month ends as the wettest October in 5 years 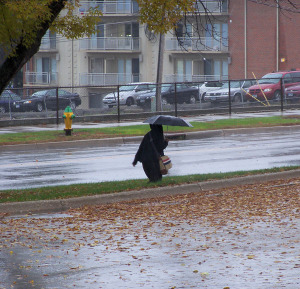 Walking in the rain in Des Moines.

The coldest air of the autumn season is filtering into Iowa for this final day of October, meaning it’ll be a very chilly night for trick-or-treating, with lows expected across the state in the teens and 20s.

State climatologist Harry Hillaker says Iowa’s weather for October overall was warmer and wetter. “The month was just a little warmer than average, despite this very cold last day of the month,” Hillaker says. “Precipitation was quite a bit above normal, actually, it was our wettest October in five years.”

However, he says rainfall in Iowa was hit-and-miss depending on which part of the state you were in. Hillaker says, “An interesting pattern, going back to August, we’ve had very similar pattern across the state where southwestern and southern Iowa has been rather on the wet side and northern and northeastern Iowa quite a bit on the drier side of usual, so, quite a contrast across the state.”

While parts of Iowa reached down to the 20s early this morning, Hillaker says the month ahead should be heating up by comparison.

“We’re looking for temperatures to be averaging above-normal,” he says. “It doesn’t seem that way today with the cold northwest winds but the long-range outlook from the National Weather Service the last week or two has been very consistent pointing back towards a trend for abnormally temperatures.”

It hit 31 degrees in Des Moines early this morning, the latest freeze date in Iowa’s capitol city since 1998. The first freeze usually arrives in central Iowa, on average, by October 13th.