You are here: Home / Fires/Accidents/Disasters / One dead, two injured in Fayette County accident 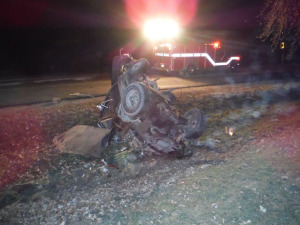 One person died and two were injured in this pickup accident in Fayette County.

A young man was killed and two others were seriously injured in a one vehicle crash in Fayette County over the weekend. The crash happened shortly after 3 a.m. Saturday on a roadway west of Oelwein.

Fogle and a passenger, 20-year-old Branden Samuel of Wadena, were thrown from the pickup. Another passenger, 21-year-old Louis Lumpkin of Waterloo, was trapped inside.

Samuel was killed in the accident, while Fogle and Lumpkin were taken to an Oelwein hospital and later air lifted to University of Iowa Hospitals and Clinics in Iowa City. Their current conditions are not available.