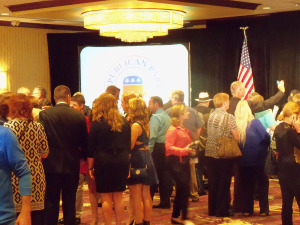 The chair of the Iowa Republican Party, Jeff Kaufmann, says the candidates are anxiously awaiting the results.

“They are very nervous, I remember I was a candidate for awhile to,” Kaufmann says, “you know it’s kind of like you want to do something, but you don’t know what to do yet because you’ve been so active and so much energy has been put into this. What I hear most from candidates right now, I hear a lot of thank you’s out there.”

He feels his party has gained momentum in the closing days of the campaign. “Its kind of hard to put it into words, there’s an energy, there’s a hope. People understand taht we need to go in a different direction,” Kaufmann says.

Kaufmann says the party is on the verge of a very historic night, which could include the election of Iowa’s first female senator if Joni Ernst wins. “This Joni phenomena is just fantastic, ” Kaufmann says. “I think it’s historical, I think it’s good for Iowa and I think politically it’s going to be one for the record books.”