You are here: Home / Fires/Accidents/Disasters / Seatbelt use in Iowa increases in new survey 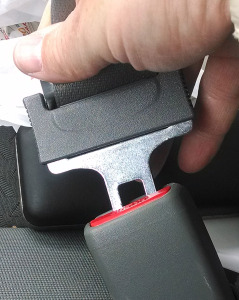 The number of Iowans using seatbelts has increased.

More Iowans are buckling up when they get in a vehicle.

“This year, we came up with a percentage of 92.8 which is a full point higher (91.8%) than the same survey in 2013,” Nagel says. The increase in seatbelt usage is one reason for the relatively low traffic fatality numbers posted in recent years in the state.

Nagel says there’s room for improvement. He notes the roughly 7 percent of non-seatbelt users account for nearly half (46%) of all fatalities on Iowa roadways.  A law, requiring front-seat passengers wear a seat belt, was enacted in Iowa in 1987. “If you go back to 1987, our compliance rate back then was 56 percent,” Nagel says. “Now we’re at almost 93 percent, so we’ve had a pretty significant raise since that time.”

Last year in Iowa, 317 people were killed in traffic crashes. That marked the lowest total since 1944. Nagel says we’re on pace to possibly have even fewer traffic fatalities this year. The National Highway Traffic Safety Association (NHTSA) requires each state to conduct a seatbelt survey, using NHTSA guidelines, to continue to receive federal funding for traffic safety campaigns.

In 2013, Iowa posted one of the highest seat belt compliance rates in the country. It’s unclear, for now, where Iowa stands this year in the national rankings. “We don’t know yet, because Iowa was one of the first states to actually get their seat belt survey in and approved by NHTSA. It could be March before everyone has their (survey) in and finalized, so we won’t know for a while yet,” Nagel said.