You are here: Home / Business / Kemin breaks ground for a new facility in Des Moines 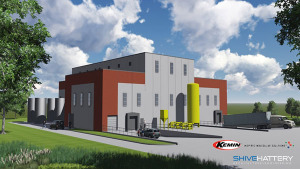 Kemin’s new facility will look like this when completed.

Kemin Industries vice president, Jeff Murphy, says the plant in Des Moines will make a product that coats and protects amino acids that are put into feed for dairy cows. “That allows her to utilize it more efficiently and helps her to produce more milk and grow more rapidly, etcetera,” Murphy says. “We’re very excited about it, because this is a branch of our business that’s been rapidly growing for the past few years.”

The company manufactures all types of nutritional products for humans and animals and is in the midst of an expansion that included a new Molecular Advancement Center that opened in August of 2013. 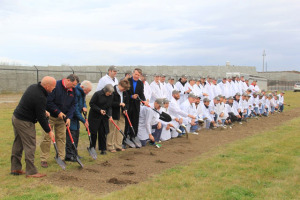 Murphy says the latest expansion will add more jobs. “Kemin made a five-year commitment several years back where we would have a large multi-step building process, and in that process we talked about adding 98 news jobs. Well since that time, we’ve already added 140 new jobs, and this new building will bring 24 additional full-time mid-level skilled positions in our operations department,” according to Murphy.

Murphy says it should take around one year to get production going. “We’ll begin construction immediately, and we hope to produce the first product out of there in November of 2015,” Murphy says.

The company is investing approximately $17 million into the state-of-the-art facility. Murphy says it’s not the end of the company’s expansion. “Approximately next June, we’ll break ground on a new worldwide headquarters so that we can consolidate a lot of our employees that are in different rented office space and bring them all back together so that we can enjoy the synergies that we know we’ll get by having everyone in one location,” Murphy says.

Kemin has nearly 2,000 employees and operates in more than 90 countries with manufacturing facilities in Belgium, Brazil, China, India, Italy, Singapore, South Africa and the United States.