You are here: Home / Sports / Waukee and WDM Valley playoff game a rematch of week 1 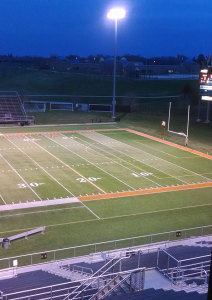 The high school football playoffs resume Friday with the quarterfinal round.

The high school football playoffs resume on Friday night with quarterfinal round matchups in all six classes. It will complete a grueling stretch for teams playing their fourth game in 14 days.

“It’s like a blur, and as time goes by and games come as quickly as they do, weekends don’t seem to exist. It’s crazy, but it’s a fun kind of crazy to go through…it’s just a lot of fun,” Waukee coach Scott Carlson says.

The Warriors are ranked fifth in class 4A and will be looking to advance to the semifinals for the first time tomomrrow night when they host 4th rated West Des Moines Valley. Waukee beat the Tigers 28-6 on the seasons’ opening night. Carlson says it seems like another season ago when they played the first game as so much has changed throughout the season.

Carlson believes this is an even matchup and it will be decided by mistakes, and he says mistakes are what end up leading to wins or loses this time of year.

Valley coach Gary Swenson says the Tigers were dominated at the line of scrimmage in the first meeting. “They are very talented and they are big up front and they have some really good skill kids. We did not stand in there defensively against them, and offensively we just gave up penetration. Every play it just seemed that somebody missed a block, or lost a one-on-one battle with a guy they were trying to block,”Swenson says.

Swenson says the defense has made big strides since the first meeting and he says they can’t fix the size mismatches, but he says they are tougher and more season and he hopes that means they are more successful up front.