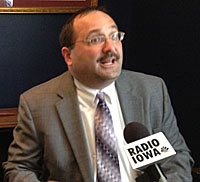 Three of Iowa’s top Republicans met by phone this morning to talk about the future of the Iowa Straw Poll, an event in Ames that has been both party fundraiser and provided a snap shot of a presidential candidate’s organization in Iowa in the summer before the Iowa Caucuses.

“We are keeping our options open on where the Straw Poll might occur and what the Straw Poll may look like,” Kaufmann says. “There will be some kind of event in the summer of 2015.”

In December or January, a meeting will be set up so Kaufmann and other top party officials can meet with Governor Terry Branstad, Congressman King, Senator-elect Joni Ernst and Congressmen-elect Rod Blum and David Young to come up with a list of options for the event. The final decision will be made by the party’s state central committee.

“You know, I can’t even say for sure it will be called a Straw Poll,” Kaufmann says. “…We’re going to figure out together so we have agreement across the board on what this should look like and how we should conduct it.”

Kaufmann says making sure the event gets the blessing of the Republican National Committee is also key, since national party leaders have carved out an exception so Iowa’s precinct Caucuses can remain the first event on the presidential campaign calendar.

“We want to make sure that whatever event we have is nothing like our Caucus and doesn’t take the place of the Caucus, nor should we get two bites at the apple,” Kaufmann says.

Critics of the Straw Poll have complained it gives Iowa two “first” events in the presidential selection process, as candidates like Tim Pawlenty and Elizabeth Dole who have failed to place well in Straw Polls of the past have ended their campaigns right after the Straw Poll. Straw Poll defenders have argued it’s a way for candidates to do a test-run for the Caucuses, plus it’s a way for the Iowa GOP to raise money. Kaufmann says the fundraiser aspect is a “misnomer.”

“A long time ago, a decade ago, it was a fundraiser,” Kaufmann says. “Expenses have increased dramatically and, to be honest with you, we have to look at our dollars and cents in terms of our expenditures here because we certainly cannot lose money on event like that and it’s not as lucrative as anyone thinks.”

Kaufmann says, for him, the value of the event is the energy and enthusiasm it generates among Republicans for the campaign season ahead. Kaufmann talked about the future of the Straw Poll this morning with Governor Branstad and Congressman King, just moments before he spoke with Radio Iowa.

About a year ago Branstad suggested it may be best to consign the Straw Poll to history. The winner of the 2011 Straw Poll, Michele Bachmann, saw her campaign collapse in the final days of the 2012 campaign and she dropped out of the race the day after the Iowa Caucuses.

The first Straw Poll was held in 1979 and George H.W. Bush’s win in the balloting was seen as a signal missed by the Reagan campaign, as Bush went on to win Iowa’s Caucuses. The event has been held the summer preceding years in which Republicans have had a contest for the party’s presidential nomination. Televangelist Pat Roberts’ surprise showing in the 1987 Straw Poll was a harbinger of his second place finish in the Caucuses the following year.  George W. Bush is the last candidate to win the event en route to securing the GOP’s presidential nomination in 2000.  Mitt Romney won the Straw Poll in 2007, but finished second in the 2008 Iowa Caucuses. Romney did not participate in the 2011 Straw Poll.  Rudy Guiliani and John McCain also skipped the 2007 Straw Poll.